I recently received the 52 New Foods Challenge cookbook and was so inspired by all the creative recipes that I decided to share my own recipe with you guys!  This cookbook is all about inspiring families to work together, get healthy together, and try new foods together.
Reserve your copy! Ships November 4, 2014.

After looking through some of the recipes, I came up with my own smoothie recipe that I like to call the Banana Bash Smoothie.  It does have one pretty interesting ingredient that you might find surprising…

Break banana into 3 or 4 chunks, toss into blender.  Scoop avocado into blender, along with milk, sugar and ice if you want a thicker smoothie.  Add cocoa powder to make a chocolate smoothie.
Blend for almost one minute until smooth.  If smoothie is too thick, add about 1/4 cup more milk. 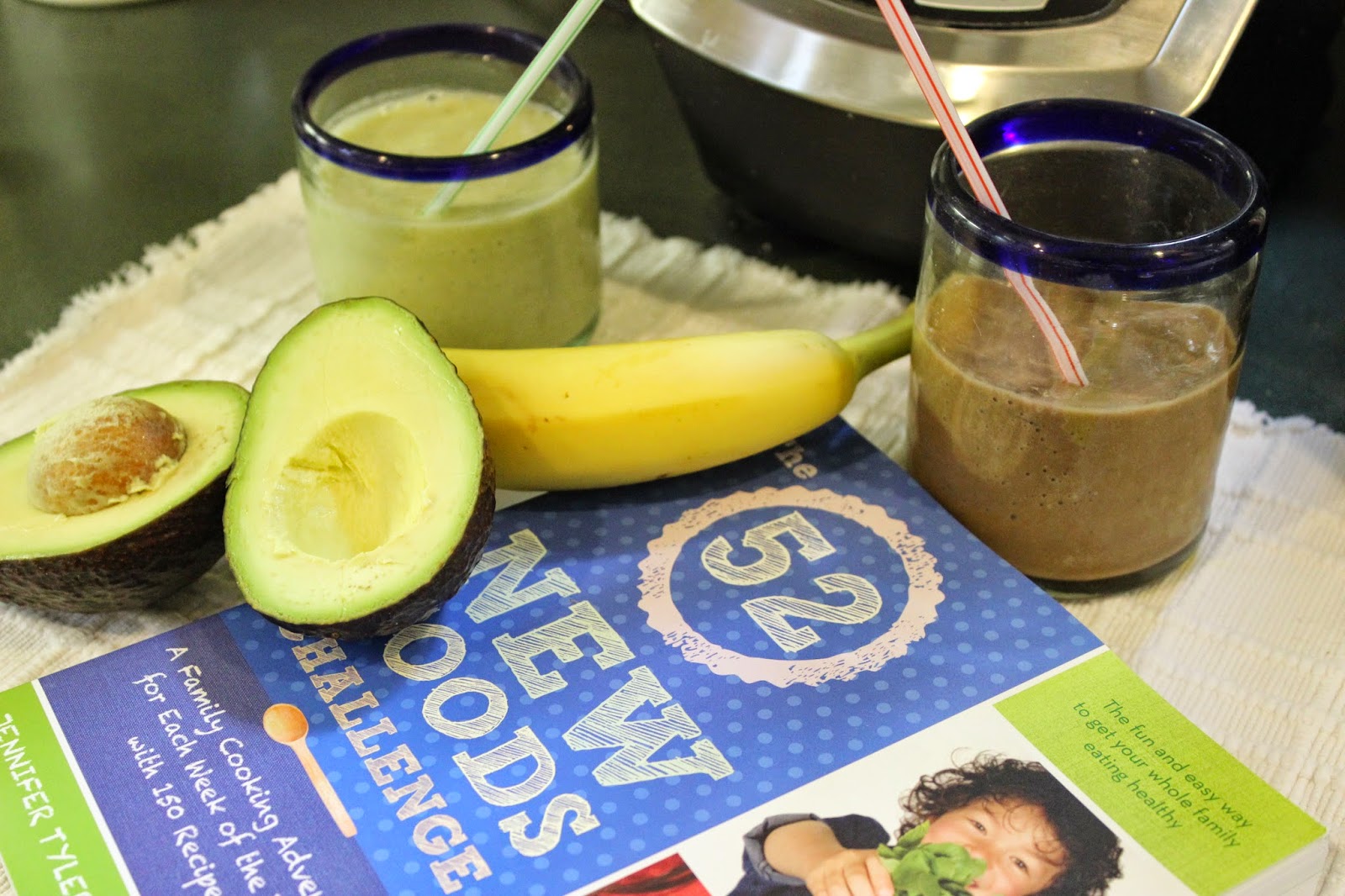 Well, there you have it!  This smoothie is super delicious and nutritious, your whole family will love it!  The best part is, you can have as a breakfast, snack, or even dessert.  Give it a try and let me know what you think!

See you next time,


Lizzie Marie
No comments:
Email ThisBlogThis!Share to TwitterShare to FacebookShare to Pinterest

Tiny Tidbit: The Art of Slicing and Dicing Avocados

Here's a tiny tidbit to show you the best and safest way to cut avocados.

Thanks for watching, see you next time!
Lizzie Marie
No comments:
Email ThisBlogThis!Share to TwitterShare to FacebookShare to Pinterest

“That sucks,” one of my friends says.  “Why are your parents making you do that?”  I’m sitting at a table, eating dinner with my friends, and I’ve just told them that I’m vegan.  I start to explain to them how my parents aren’t forcing me to do it, and it was actually my idea to go vegan, but instead I settle on ‘It’s actually not too bad’.  Another friend peels a slice of pepperoni off his pizza and waves it in my face.  They’re only doing it to be funny, and a couple of months ago, I might have reacted similarly if one of my friends suddenly decided to be vegan (let’s face it – it is pretty weird for a teenager to willingly avoid pizza and ice cream).  But despite that, some part of me continues to wonder why veganism is defined by many people, and portrayed in the media, as being a weird diet reserved for hippies and health snobs.


When my family and I first began to tell our friends and family that we were vegan, their reactions ranged from “Wow, that’s interesting; tell me more” to “That sounds awful, you can’t eat anything good.”  Some people even reacted as though I had offended them; as though my vegan lifestyle affected them on a personal level.  A few of my friends would crack jokes where being vegan was the punchline (for example: “How can you find the vegan at a dinner party?  Don’t worry, they’ll tell you”).  While none of their reactions were hostile or outright rude, I will admit to sometimes growing annoyed at their jabs to my personal lifestyle choices.  I don’t judge them for eating meat, why are they judging me? I’d sometimes think.


The truth is: being vegan is weird because it goes against what is generally considered “normal”.  While everyone has a different definition of what the “normal” American diet is, a lot of times, unfortunately, it consists of mostly unhealthy foods.  When you think of an all-American meal, you probably picture a burger, fries and a milkshake, or something to that effect.  So when a person who was raised in a fast-food-glorifying culture is faced with someone who has chosen a radically different diet from the norm, it isn’t surprising that their first reaction would probably not be immediate acceptance.


Let’s play a game called “Spot the Vegan”.  Picture three people standing side-by-side: one man in a suit, one woman in a nice blouse and jeans, and one college student with dreadlocks, ripped jeans, and droopy eyelids.  Let’s be honest: you’ve probably assumed that the vegan is the ill-dressed college student, right?  But in reality, the vegan could be any of these three people.  Our society has tried to construct one-dimensional boxes that all vegans, regardless of their background or personality, can fit into.  The two most popular stereotypes that I’ve experienced are those of the hippie who preaches world peace and the health snob who treats veganism as a trend that exists in the same vein as the newest, coolest fashion or technology fad.


There are countless films and TV shows that reinforce these stereotypical vegan characters.  The hippie vegan is usually portrayed as looking as though they haven’t showered in a few weeks, and their contributions to the film or TV show are mostly limited to proclamations of world peace, or in some cases, criticisms against meat-eaters.  On the other end of the spectrum, the health snob vegan is probably young and hip, and sometimes pretentious to the point of thinking they are better than other people because they’re vegan.  While I don’t deny the existence of hippie vegans or vegans with a “mightier than thou” attitude, I do believe that most of the time, you wouldn’t be able to spot the vegan based on their appearance or personality alone.


The purpose of this article is not to criticize or attack people’s reactions to my veganism.  I am completely willing and eager to discuss my veganism with people, regardless of their reaction, and I love when people are genuinely curious to understand what veganism is, and why I’ve chosen to follow it.  The purpose of this article is simply to share with you my journey to understand, and my opinions as to why, people react they do.  The bottom line is that yes, sometimes there’s nothing I want more than a pint of ice cream or a slice of pizza (but I have discovered certain vegan alternatives that pretty dang delicious).  And yes; unfortunately, there are some vegans out there who criticize meat-eaters or think they’re better than others because they refrain from eating animal products.  However, I, personally, am not against people who aren’t vegan, and I believe people should follow the lifestyle that is the best for them.


Veganism is not a set of rules that I force myself to follow, and it is not something that my parents force me to do.  For me and my family, being vegan is a lifestyle; it involves our diets and bodies as much as it involves our attitudes and mindsets.  I am not putting a time limit on how long my veganism will last; for now, I know that being vegan has improved my health and my life, and I will make changes to my diet and lifestyle based on what is best for me and my health.  I celebrate being vegan, and I hope that this article has encouraged you to become aware of, and possible redefine, how you view and treat veganism.  Please feel free to reach out to me if you have any questions or comments, I can’t wait to continue this journey and see where it leads.  Thank you so much for reading.