Mastering the Art of Boeuf Bourguignon

Boeuf Bourguignon, French for beef stew, is perhaps Julia Child's most infamous recipe. Ever since I received my copy of Julia's Mastering the Art of French Cooking, I have aspired to recreate her masterpiece meal. A few weeks ago while watching Julie & Julia, I became inspired to make this dish despite being slightly intimidated. After assembling the ingredients, the journey began. 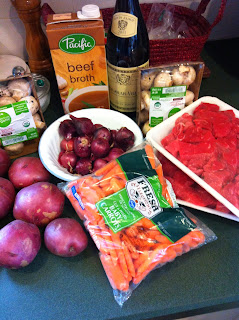 Phase I: Cooked copious amounts of bacon then caramelized pearl onions in some of the bacon fat. The onions hung out in a covered pan for about an hour. At this point, our house began to smell what I imagine heaven to smell like. 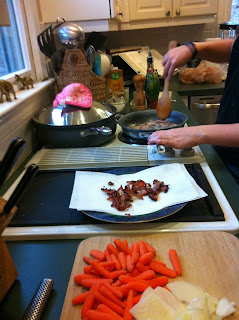 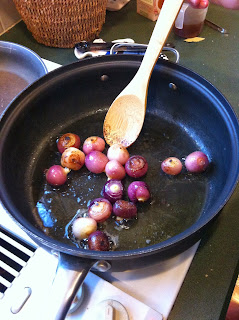 Phase II: Quite frankly, this was the most painful part of the process because it involved searing a heck of a lot of chunks of beef that had to be dried with a paper towel first. Yes, each piece of meat patted dry before searing. 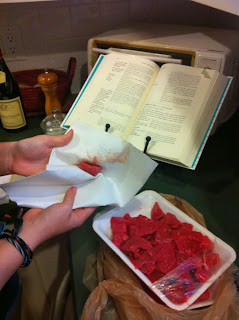 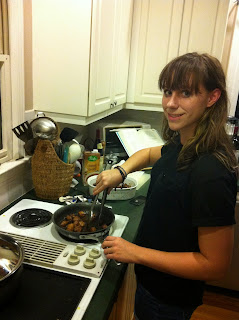 Phase III: Sautéed carrots and, surprise, MORE onions! After these veggies were slightly caramelized, I added them to the beef chunks and placed into a casserole dish along with a little bit of flour and half a bottle of wine. Don't worry, the alcohol burns off. I popped the casserole into the oven where it baked for a few hours.

Phase IV: I must admit, although I am able to stomach most anything, the one thing that might bring a tear to my eye is a cooked mushroom. Regardless, I soldiered on for the sake of my parental units. Never rinse off mushrooms with water because they will absorb the water and become nasty. Instead, brush off any dirt with a dry paper towel. The mushrooms were sautéed in butter and olive oil.  I almost panicked when the oil and butter magically disappeared (it absorbed into the mushrooms), but the liquid released back into the pan after a few minutes and I lightly caramelized the mushrooms. At this point, I became an expert on caramelizing most anything.

Phase V: As if that is not enough food, I boiled a couple pounds of potatoes which were served alongside the stew. Remember what Sam Wise said, "Boil 'em, mash 'em, stick 'em in a stew."

Phase VI: Took a nap to recover from this seemingly endless process. 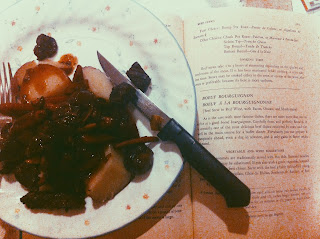 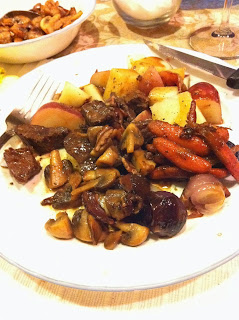 Phase VII: At this point, I didn't have the time to worry about presentation, so I just plated the potatoes and stew and enjoyed!  I survived and became a master of boeuf bourguignon! Boeuf bourguignon is definitely not fast food, it took about 5 hours to make. I accomplished a life long goal of creating this delicious and complicated dish in my own kitchen.

As Julia would say, "Bon Appetite!"
Email ThisBlogThis!Share to TwitterShare to FacebookShare to Pinterest