I’ve always heard people talking about oxtail soup, but I’d never made it or tried it before. I recently took a trip to a German butcher and he had some oxtail on hand. I decided to get some and make oxtail soup!

I called my grandparents, Ma and Pa, to see if they had any advice on how to cook the oxtail. When I asked Pa about oxtail soup, he made a disgusted noise and said, “I hate oxtail soup!” I asked him why and he answered, “The name! It sounds so weird and disgusting!” When I prompted him about why he didn’t like the flavor of the soup, he responded and said, “Oh, I love the flavor, it’s just the name that I don’t like.” This made me crack up, because even though oxtail does sound disgusting, it’s just as odd as eating ribs, right?

I also learned that Pa’s grandma used to make oxtail soup a lot when Pa was younger. When my grandparents were kids, the oxtail would be the part of the oxen that the butcher would either throw away or give away. People soon started realizing that the oxtail (which is now cattle tail) was the most flavorful part of the oxen, and nowadays you sometimes have to special order it! 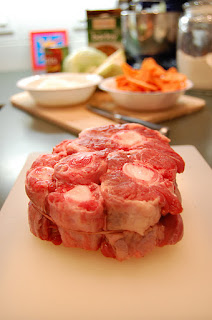 INGREDIENTS:
1 tail cut into sections by butcher, about 4 pounds
1 medium onion, chopped
1 14.5 oz can all-natural diced tomatoes (my favorite is fire-roasted tomatoes)
*Use your favorite veggies (chopped celery, peas, etc.), I used the following:
Several carrots - chopped or 1/2 bag of carrot chips - roughly chopped
1/2 small head cabbage, chopped
A few quarts of water, depends upon the size of your pot
1/3 cup barley
2 tablespoons grape seed oil (better to sear with other than olive oil which will burn)
1 teaspoon thyme
1 bay leaf
Salt and pepper, to taste

This soup takes a looooooooong time to cook. Prepare it the day before you plan to eat it. The longer the tail cooks, the more flavorful the soup.

In a large pot, heat oil over medium heat. Salt and pepper both sides of oxtail bundle (butcher may bind tail with twine). Sear both sides of tail bundle until browned. Toss in onions, snip twine and remove, then sear all sides of tail sections until browned. Deglaze pot: add about 1/4 cup of water to pot and scrape brown bits off bottom of pot. After tail is browned on all sides, add enough water to your pot or slow cooker until within 2 inches of top. Increase heat to high and bring to a boil. Add about 1/2 teaspoon salt and several turns of pepper mill for cracked black pepper. Reduce heat to low, put lid on pot and simmer for about 6 - 8 hours, stir occasionally.

Remove lid from pot and move pot to a cool part of your stovetop to cool down. You want to be sure the soup is completely cooled off before you put it into the refrigerator for the night, about 2 hours to cool. Before putting soup into frig, remove tail pieces and with a fork, remove any meat from bone. Place meat back into pot and discard bones. Place cooled soup into frig overnight.

The next day, remove soup from frig and carefully skim off top layer of fat. Place soup back onto stove and bring to a boil. Add veggies, tomatoes, barley, thyme and bay leaf. Reduce heat to low, put lid on pot and simmer for 1 hour. Taste soup and adjust salt and pepper to your liking. 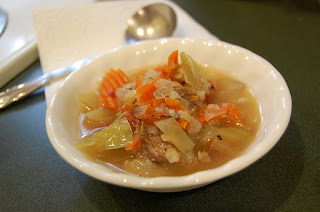 The oxtail soup was delicious and it warmed my belly up. I can’t wait to make it again!