My Adventures in Sarabeth's Kitchen

Recently, Sarabeth Levine from Sarabeth's Kitchen contacted me through Twitter. She said if I was ever in New York City to stop by her bakery and bake with her for a day. It just so happened that I was going to be in New York City! I told her I would love to come and bake with her. A few days later I arrived at her bakery in Chelsea Market. Before I started baking I ate lunch at her bakery; tomato soup and a grilled vegetable panini. The tomato soup was delicious and non-traditional. It had chunks of tomato in it and it was served with a buttermilk biscuit that was light and fluffy. The grilled vegetable panini was really yummy; the vegetables were fresh and they were seasoned perfectly. Then it was time to bake! 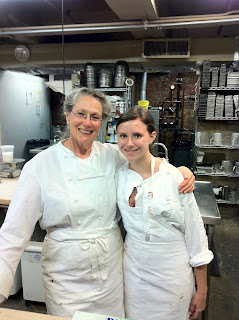 Sarabeth gave me a chef's coat and an apron, telling me I would end up covered in chocolate. I had asked her if we could make Chocolate Chubbies, which is somewhere between a cookie and a brownie. I learned a lot of tips and, sure enough, I was covered in chocolate! I saw the huge ovens they use to bake, all of the pre-made pastries and I even saw some HUGE mixers! I could have fit inside of them! 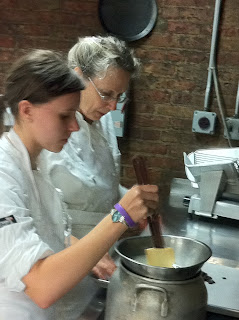 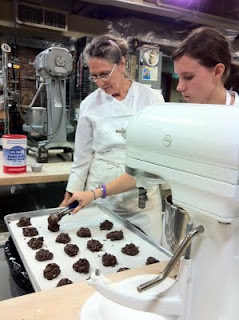 While the Chocolate Chubbies were baking, Sarabeth and I started talking about whipped cream. She explained to me how to make whipped cream the right way, and then she suggested we make some. To make whipped cream, you first mix the cream with an electric mixer until it's not completely stiff with a bowl of ice under the mixing bowl. Sarabeth then added some superfine sugar and fresh vanilla bean from a pod that had been soaking in rum. She then mixed the whipped cream by hand until it was firm and fluffy. It was amazing! The vanilla bean made really flavorful, yet it still had a delicate taste. 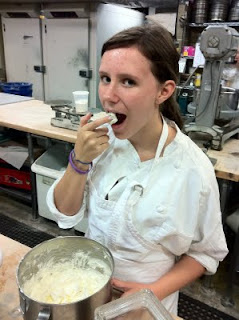 Sarabeth brought out some buttermilk biscuits and homemade strawberry jam. We put the whipped cream on the biscuit and topped it with jam. It was the best strawberry shortcake I ever had! The strawberry jam was chunky and loose, not like the thick jelly you find in the stores. I learned about this particular batch of strawberry jam from Sarabeth's blog

Before I left, Sarabeth gave me her beautiful cookbook, Sarabeth's Bakery: From My Hands to Yours, Rizzoli 2010. Be sure to order your copy of Sarabeth's book so you can have fun making Chocolate Chubbies with your family! 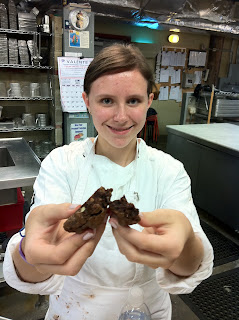 Thank you for the wonderful treats, Sarabeth!
Lizzie Marie
Email ThisBlogThis!Share to TwitterShare to FacebookShare to Pinterest