I recently interiewed Frank Mason, who is the creator of the Bluebird CSA (Community Supported Agriculture) program in Griffin, Georgia. I recently learned the meaning of hyper-local: 'supporting the residents in a community'. For example, the Bluebird CSA sells produce only from Georgia farmers. Another thing I learned is the difference between a CSA box and a farmers market. Customers pre-pay for a CSA box and they can't pick what produce they want in the box, but they get the freshest produce in season from local farmers. 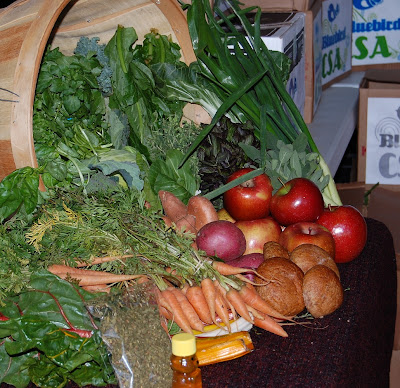 At a farmers market people can pick what produce they want and pay the farmer at the market. Farmer Bob James in Griffin, Georgia explained that there sometimes there is a lot of leftover produce that doesn't sell at farmers markets which is not a good thing for farmers. He said it takes a long time to harvest the items and then farmers sit all day at a market hoping to sell everything. Farmer Bob explained CSAs are great for farmers because customers pay for their boxes first, then farmers know exactly how much fruits and vegetables to pick and deliver so there is no waste like there can be with a farmers market. 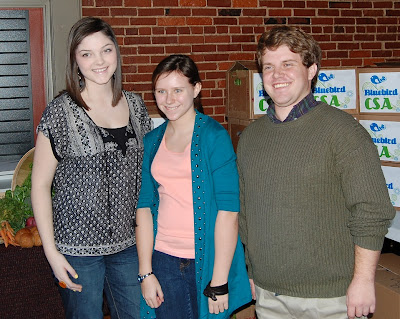 
Some friends of mine ordered a CSA box from a different program (there are a lot of new CSA programs popping up all over Georgia). The program they ordered their box from said their vegetables and fruits came from local farmers. However, when my friends opened the box they found rotten celery and discovered that some of produce was from Washington state according to the little stickers on the produce! My family had a very similar experience last year. We went to a local farmer's market--again the people said that the produce was from local farmers--and we bought some fresh vegetables. It wasn't until we got home that my mom realized that the produce was actually from Mexico (the little sticker was there to prove it)! Beware of the faux-local CSA programs out there!